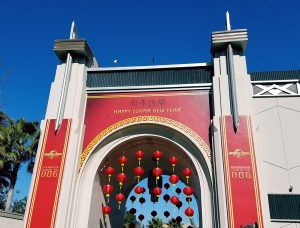 With the Lunar New Year officially beginning on February 16th, it’s time to celebrate the Year of the Dog—and man’s best friend—by gathering with family and friends at Universal Studios Hollywood’s special Lunar New Year event filled with festivities, fun, fare, and time-honored traditions. Guests of all ages, including the young and young-at-heart will be delighted at this one-of-a-kind celebration going on now through Sunday, February 25, 2018.

What’s good Gab had the good fortune to be invited to Lunar New Year at Universal Studios Hollywood—and what a spectacular celebration we experienced, making for an unforgettably warm and wonderful way to welcome the “Year of the Dog.”

Here are the highlights and must-see festivities: 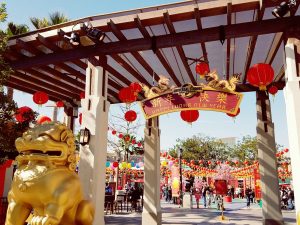 This one-of-a-kind festival comes alive at the heart of the theme park in Universal Plaza. Guests will experience a whimsical world within filled with colorful and floating Chinese lanterns, banners of the 12 zodiac animal signs, beautiful plum blossom Wishing Trees abound—and best of all, the plaza features a variety of areas where you can come face-to-face with your fave DreamWorks’ Kung Fu Panda characters and scenes from the beloved franchise. 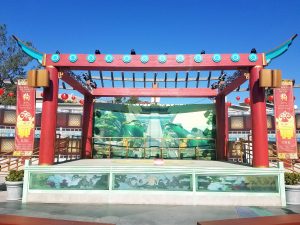 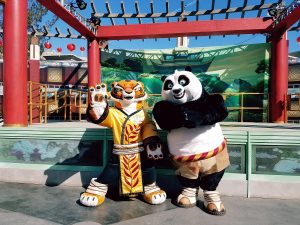 You will marvel at Universal Studios Hollywood’s all-new DreamWorks’ Kung Fu Panda Jade Palace Performance Stage that stands tall overlooking the Universal Plaza with its majestic details and colorful design. Here you will meet DreamWorks’ Kung Fu Panda’s very own Po and Tigress who stand in front of the stage to greet and snap a selfie with guests. 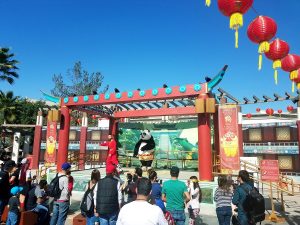 Hang out in front of the sacred Jade Palace overlooking the Valley of Peace and enjoy an interactive martial art demonstration performed by Master Po and friends, and see young warriors get a chance to test their skills. 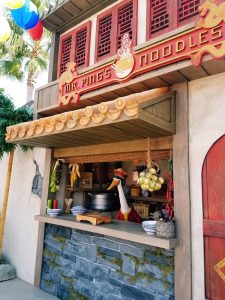 Enjoy giggles and good Asian fare at Mr. Ping’s Noodle Shop where you’ll get to interact with Mr. Ping himself and chow down on dim sum and of course, his famous NOODLES! Mr. Ping will entertain you with his wit and wisdom. Just step right up to Mr. Ping and laugh it up as he tells his humorous yet heart-warming tales of a young Po and his love for noodles. Be sure to say “noodles” and pose for an insta-worthy pic with Mr. Ping—and don’t forget to dine at Mr. Pings Noodle Shop.

What’s good Gab chatted and chuckled with Mr. Ping about his Noodle Shop, Po’s Kung Fu greatness, his now “empty nest.” and got a cool photo-op with Po’s adoptive father. We then headed around the corner to try out his delicious dim sum and then some at Mr. Ping’s Noodle Shop! 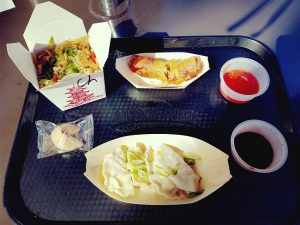 Be sure to make way to Mr. Ping’s Noodle Shop to enjoy a variety of delicious Asian dishes. We ordered the Oogway Egg Rolls (Chicken served with a Sweet Chili Sauce), Po’s Pot Stickers (Steamed Pork served with spicy soy sauce), and we were sure to ask for the Secret Ingredient Stir Fry Noodles, a must for Lunar New Year said to bring long life—and a tasty and warm dish that filled our bellies with delight! 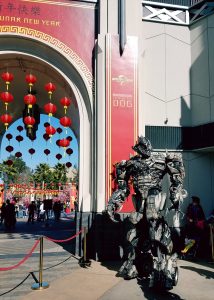 Face off with the MEGATRON from Transformers who returns this year to reign supreme over the Lunar New Year celebration. MEGATRON, the imposing leader of the DECEPTICONS, stands tall next to the entry of the festivities to greet guests and make his larger-than-life presence known.  Be ready because MEGATRON is on the prowl for humans who are daring enough to take a picture with him and engage him in Mandarin! And if you can’t muster up the courage to face off with the 12-foot tall sentient robot, don’t worry because you’ll have plenty of fun watching him tease guests and pose for pics. 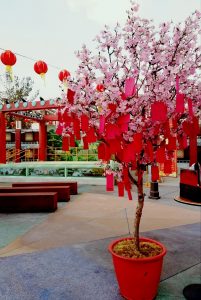 The Universal Plaza is adorned with Plum Blossom Wishing Trees that deliver both a whimsical and traditional touch. You can dream big this “Year of the Dog” and write your wish for the New Year. 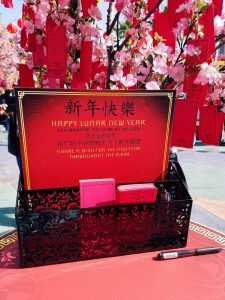 Simply, visit one of the Plum Blossom Wishing Trees and tables throughout the plaza, and write your wish down on the red cards. Then clip your card on one of the Plum Blossom Wishing Trees for good luck. You will feel a sense of joy and optimism seeing these beautiful blossoms throughout the plaza, and knowing they hold and guard every guests’ hopes, dreams and wishes for the New Year. 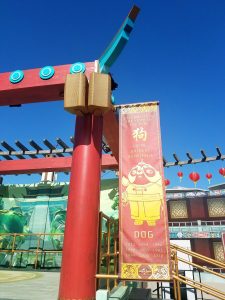 The Universal Plaza is circled by the 12 Chinese zodiac animal signs so you can walk around and enjoy searching for your year and animal sign. You’ll have fun reading about your sign’s special symbolic attributes which will fill you with awe and inspiration! And you’ll get to learn about the Year of the Dog’s sign and its symbolic characteristics of being Loyal, Diligent, and Adaptable. 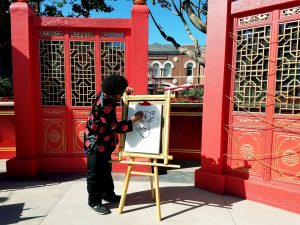 Put on your artist cap and sit down with a veteran DreamWorks animator who will show you his skills and practical techniques on drawing your fave Kung Fu Panda characters. Best of all, once you’ve created your masterpiece you get to take it home as a keepsake memento.

What’s good Gab had fun watching the animator and young artists draw Tigress, the fearless feline of the Furious Five! 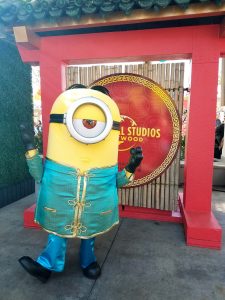 Illumination’s Minions from Universal Studios Hollywood’s popular Despicable Me Minion Mayhem ride join the festivities this year. Be sure to get in line to meet one of the loveable yellow creatures and feast your eyes on their standout style because the Minions are decked out for the festivities in brightly colored and traditional Lunar New Year attire to deliver the perfect photo op!

And when you venture out of the Universal Plaza you’ll also enjoy all the epic entertainment that Universal Studios Hollywood has to offer. Check out the World Famous Studio Tour to get a behind-the-scenes look at television and movie-making magic in select languages, including Mandarin. Explore The Wizarding World of Harry Potter™ and soar above the castle grounds in the Harry Potter and the Forbidden Journey™ attraction, a truly magical and unforgettable ride! Grab a seat with The Simpsons™ on a virtual reality roller coaster ride in Springfield U.S.A.  Band together with the TRANSFORMERS in an epic battle and thrill ride in Transformers™: The Ride-3D. Get into a little harmless mischief as a minion in the Despicable Me Minion Mayhem attraction. And go for a big splash and experience WaterWorld – Universal Studios #1 rated show.

More information is available at UniversalStudiosHollywood.com. Mandarin-speaking guests can learn more about the Lunar New Year event at  ush.cn.