In honor of the 241st United States Marine Corps Birthday which is observed annually on November 10th, 12 Marines ran 241 miles as part of the Reebok Ragnar Relay in Napa Valley this past weekend.

The Reebok Ragnar Relay is a unique over-night relay race that pushes you mentally, physically and socially. Running on restricted food and shelter, the Marines added an extra 58 miles to the standard Ragnar Napa distance of 182 miles to run a maximum of 241 miles in honor of the 241 years of service the Marines have given the United States. They also ran the final 5 miles together as a unit, crossing the finishing line with the American flag in hand.

Starting at Ocean Beach in San Francisco, the Marines ran all the way to the Skyline Wilderness Park in Napa Valley, supported by Marine branded team vans. A selection of local Marine Corps veterans who fought in the Korean War and WWII, as well as families from surrounding communities, were also on hand at the finish line to cheer the Marines on towards the finish and congratulate them on their achievement.

During 241-mile Reebok Ragnar Relay, together the Marines tallied up the following fun stats:

The Reebok Ragnar Relay pushed them mentally, physically and socially, but the Marines conquered the relay with strength, endurance, and determination—and successfully completed the 241 miles in honor of the 241st United States Marine Corps Birthday together as a team, remaining Semper Fidelis (“Always Faithful”) to each other and the mission.

Be sure to scroll below for the visual infographic with the interesting and fun stats from the relay.

And Happy early Veteran’s Day to all those that have served our country as well as to those that continue to fight for our freedom!

THANK YOU FOR YOUR SERVICE! 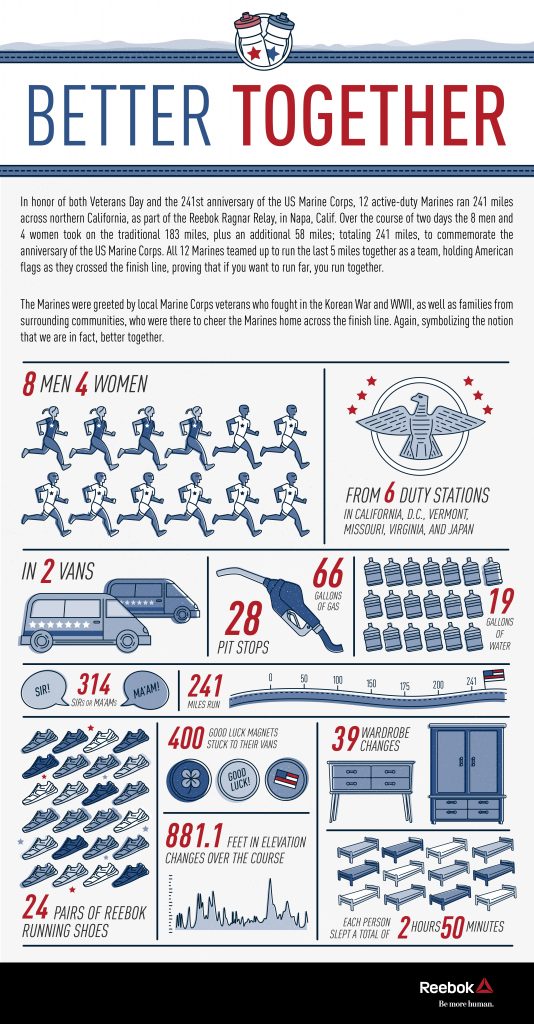