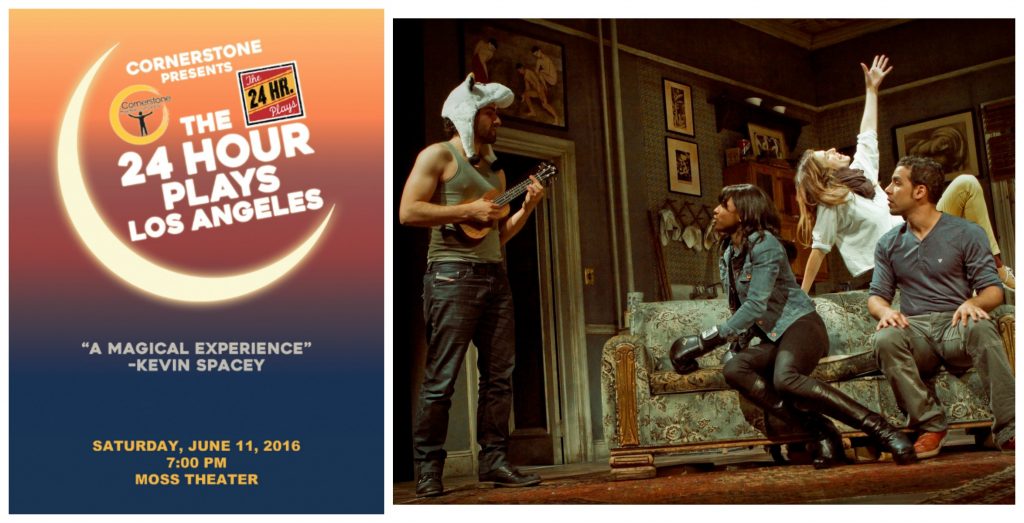 Head out for a “date night” or enjoy an “adults-only” affair with family and friends at The 24 Hour Plays® Los Angeles — and experience powerful stories and spectacular performances in this unique live production and ultimate theatrical challenge.

Cornerstone Theater Company announces The 24 Hour Plays® Los Angeles this Saturday, June 11, 2016 at 6pm at The Moss Theater at Herb Alpert Educational Village at New Roads School in Santa Monica led by a captivating and multi-talented troupe of writers, directors and actors from stage and screen who will lend their personal brilliance and talents to bring performance perfection in this live theater experience. The 24 Hour Plays® Los Angeles will serve as the company’s major fundraiser for the year — so it’s not only a great way for you to get out and enjoy this exciting theatrical experience but also a fantastic way to support the arts!

Cornerstone Theater Company’s Artistic Director, Michael John Garcés, has been a longtime collaborator with The 24 Hour Plays as both a playwright and director, both on and off Broadway, and is thrilled to have the collaboration of the two organizations now come together in Los Angeles.

“The 24 Hour Plays® Los Angeles ties directly into Cornerstone Theater Company’s mission of making new plays with and about communities and inviting past community actors and Cornerstone Ensemble members to be a part of this unique production,” commented Garcés. “This is the first time The 24 Hour Plays has been to Los Angeles since 2014 and is a rare opportunity for Angelenos to experience this type of live theater where anything can happen.”

“After a few years away, we’re delighted to bring The 24 Hour Plays back to Los Angeles in this unique partnership with a company whose mission we couldn’t support more,” said Mark Armstrong, Executive Director of The 24 Hour Plays. “Bringing a diverse group of artists together to have an extraordinary experience that celebrates community is what both Cornerstone and The 24 Hour Plays do. I can’t wait to see what happens when we do it together.”

TICKET INFORMATION
Tickets start at $150 and include admission to the wine and dessert reception with the artists following the performance. Event committee and sponsorship opportunities are available. Tickets can be purchased online at cornerstonetheater.org/24hourplays.