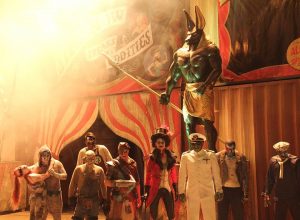 (Image courtesy of the Queen Mary)

Now that the Queen Mary’s Dark Harbor officially rests its soul until next year, the memories linger on from the larger-than-life event filled with frights, freaks, and other-worldly delights.

Dark Harbor celebrated in full gore and glory with a special Halloween Bash hosted by Bridget Marquardt — and featuring a costume contest with $1,000 Cash Prizes, a devilishly-divine Starlette Revue Halloween Drag Show hosted by the enchantingly entertaining Jewels Long Beach, and a DJ spinning music for monsters of all ages to dance the freakish night away! Top prizes were given to the vision in blue dressed as X-Men’s Mystique who came in first, the classic Charlie and the Chocolate Factory and his Oompa Loompa who rang in second, and Marie Antoinette and her king who took third place!

Dark Harbor also brought on the oddly and over-the-top Side Show of unimaginable Freaks and Oddities filled with scary-talented circus performances, sinister swings, and the famous Dark Harbor Sliders performing down slider alley.

And now that the witching season has ended, boos and ghouls will have to wait until next year to find out what Dark Harbor unveils for 2017! Until then, be sure to mark your calendars to ring in the holidays at the Queen Mary’s CHILL and NYE celebrations.