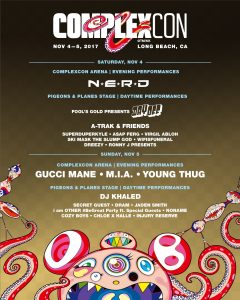 Mark your calendars because ComplexCon, the world’s largest gathering of visionary pop culture enthusiasts returns to Long Beach, CA this November 4-5, 2017  with top tastemakers, influencers, and celebs of our generation joining this year’s lineup!

N*E*R*D, the influential, genre-blurring group formed by Pharrell Williams, Chad Hugo and Shae Haley will headline night one of ComplexCon on Saturday, November 4, 2017.

Gucci Mane, the legendary trap music pioneer who will headline the second night arena performance on Sunday, November 5, 2017 along with M.I.A. and Young Thug.

ComplexCon(versations) panels are curated to provide an intimate dialogue about the topics that matter most to today’s Complex generation—from what makes a successful collaboration, to food as the new pop culture, to building an influential and lasting brand. This year’s event features the return of the standing-room-only panel “Sneaker of the Year,” in which renowned sneakerheads Wale, DJ Clark Kent, Russ Bengtson and Sneaker Shopping’s Joe La Puma debate the dopest kicks and crown the year’s top sneaker.

Sneaker of the Year — Renowned sneakerheads count down and debate the dopest kicks of 2017, featuring:

The Disruptors — A panel conversation featuring anecdotes and advice from some of the real “influencers” in the culture who have spun their unique approach into revenue streams featuring artists, executives and designers including:

My Beautiful Dark Twisted Panel — An insider’s look on what it was like to work with creative genius Kanye West on his masterpiece at a pivotal juncture in his career featuring the architects behind the album’s music, art and videos, including:

Drop Science — A deep look at the mechanics and struggles behind clothing and sneaker drops as a marketing phenomenon, featuring:

The Art of Collab — The architects and contributors to some of the most notable collaborations discuss the inspiration, process and impetus to co-create with their peers, featuring:

Hype East — The Godfathers of streetwear, both American and Japanese, sit down to dissect how both cultures have influenced each other throughout the years and how they continue to do so today, featuring:

The Rebel Chefs — The new wave of media chefs explore their growing influence and how they break the mold, featuring:

*Additional speakers and panels will be announced soon; all panels and speakers are subject to change.

Created to bring “the Internet to real life,” ComplexCon mixes concert performances, retail pop-up shops, video production studios featuring in-depth panels and conversations, art, food, brand activations, interactive technology and much more into a one-of-a-kind experience unlike any other festival in the world. The festival was formed in 2016 as a partnership between ComplexNetworks and ReedPOP, the producers of New York’s Comic-Con and Agenda.