Doughnut-lovers rejoice and head on over to Universal CityWalk and Universal Studios Hollywood to get your your fill on National Doughnut Day, which takes place today, June 1.

Between the open-air entertainment complex and theme park, guests WILL have plenty to celebrate with lots of sweet indulgence in all shapes and sizes at Voodoo Doughnut, Sparky’s Mini Donuts, and Springfield’s famous Lard Lad Donuts. 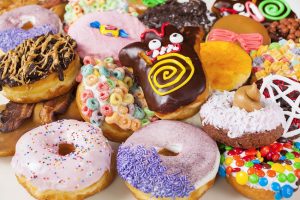 The ever-popular Voodoo Doughnut, created by Kenneth “Cat Daddy” Pogson and Tres Shannon, serves a range of 60 eclectic doughnuts, including vegan options and the Hollywood Cream, created exclusively for Universal CityWalk. A variety of scrumptious flavored doughnuts include Grape Ape, Mango Tango, the Voodoo Bubble and Bacon Maple Bar as well as their signature Voodoo Doll.  To commemorate National Doughnut Day, Voodoo Doughnut will also offer an exclusive Strawberry Confetti doughnut throughout the weekend, from June 1-3.

Sparky’s Mini Donuts was created by food entrepreneur Trish Conklin and made famous at San Francisco’s Pier 39. At the Universal CityWalk location, guests can watch donuts made fresh to order right before their eyes where they are served plain or sprinkled with cinnamon sugar.  A party-size bucket of 36 mini donuts is also available.

For a unique and captivating experience, Nectar Bath Treats creates bakery-inspired products that look good enough to eat. Their plant-based and cruelty-free handmade bath treats include donut-shaped soaps complete with a variety of scents and sprinkles, including Candy Kiss, featuring a sweet blend of pink sugar and cotton candy aromas; Coco Bliss, featuring the perfect blend of juicy pineapple an exotic coconut scent, and Razzle Dazzle, featuring a blend of blackberries and sweet vanilla fragrances. The highly Instagram-able store also showcases a “Donut Love” wall to capture a sweet moment with friends.