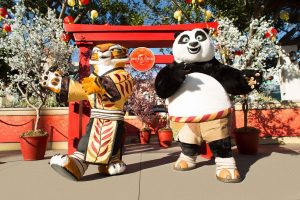 Eat, play and make merry because this is the Year of the Dog and there’s no better way to celebrate Chinese New Year—and man’s best friend—than to head on over to Universal Studios Hollywood, the Entertainment Capital of L.A. that’s set to help you celebrate in an epic way!

That’s right, make plans with family and friends because Universal Studios Hollywood welcomes DreamWorks’ Kung Fu Panda masters Po and Tigress to its all-new Lunar New Year event to usher in the “Year of the Dog” from Saturday, February 10 to Sunday, February 25, 2018—and best of all, Lunar New Year is included in the price of admission to Universal Studios Hollywood.

This spectacularly themed Lunar New Year event will take place within Universal Plaza, a polygon-shaped piazza that sits at the heart of the theme park.  Under a curtain of customary red Chinese lanterns and stunning plum blossom Wishing Trees, the festivities will come to life as guests discover the 12 zodiac animal signs accompanied by their symbolic attributes.

The completely reimagined event will also serve up a replica of DreamWorks Kung Fu Panda’s famous Mr. Ping’s Noodle Shop, including Mr. Ping himself who will invite guests to enjoy his authentic Asian fare and a selection of hot and cold Asian beverages.

Celebrate with the Minions

Year-round, Universal Studios Hollywood’s signature Studio Tour offers guests a revealing look at an authentic movie and television studio in select languages, including Mandarin.  Expertly-trained Mandarin-speaking tour guides provide insight into the world of movie-making magic as guests enjoy a front row seat and behind-the-scenes access to one of the largest production studios in the world.  In-language park maps are also available for guests.

Feed your belly to your hearts delight

Guest can also celebrate the spirit of Lunar New Year at Universal CityWalk’s Dongpo Kitchen restaurant featuring upscale and modern Sichuan cuisine. Inspired by China’s premiere restaurant Meizhou Dongpo, Dongpo Kitchen offers the comforts of a casual dining environment with both indoor and al fresco seating and caters to an eclectic palate with a variety of signature dishes.

More information is available at www.UniversalStudiosHollywood.com. Mandarin-speaking guests can learn more about the Lunar New Year event at www.ush.cn.

« Beauty buzz: Put the best you forward
Dining with the Spirits: A first-class and frightfully-fun experience »