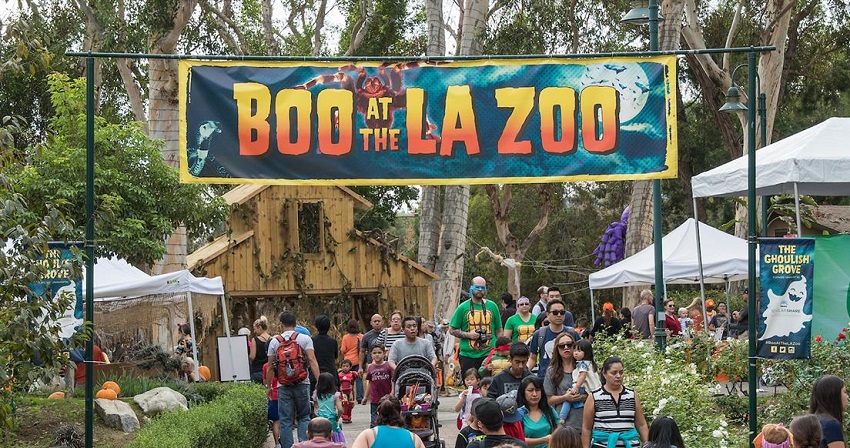 This Halloween season, BOO AT THE L.A. ZOO offers goblins and ghouls of all ages a chance to feed their imaginations with fang-tastic fun and spook-tacular learning throughout the entire month of October, beginning Sunday, October 1, and continuing through Tuesday, October 31, 2017, 10 am to 4 pm. BOO AT THE L.A. ZOO 2017 features daily activities such as an all-new “Nocturnal Adventure” maze, where guest can learn about nocturnal creatures, and the opportunity to get up close and personal with some of the Zoo’s tarantulas, scorpions, snakes and more at “Animals and Boo” encounters. Weekends include a “Swazzle’s Monster Menagerie” puppet show, pumpkin carving demonstrations, special animal feedings and other family fun. On Saturday, October 28, and Sunday, October 29, the Halloween bash offers boo-tiful crafts, roaming characters and traditional trick-or-treat stations throughout the grounds. Proudly sponsored by 99 Cents Only Stores, BOO AT THE L.A. ZOO activities are free with paid Zoo admission. Check lazoo.org/BOO for details and daily schedules.

Daily activities include “Animals and Boo” encounters, which take place 10:45 and 11:45 a.m. weekdays, with an extra show at 12:45 p.m. on weekends; a “Nocturnal Adventure” maze where guests will find fun facts, surprises, and trivia questions at every turn testing their animal knowledge to avoid ‘dead’ ends; and sweet-and-spooky photo ops.

Special weekend adventures kick off on Sunday, October 1, with some of the Zoo’s animal residents enjoying seasonal delights all their own. Plant eaters will relish “Creature Treats” such as pumpkins, while carnivores will devour their favorite fare – carcasses and bones – during “Fearsome Feedings.” (Parental discretion advised for the latter.) Starting Saturday, October 7, weekend days will also feature “Swazzle’s Monster Menagerie” interactive puppet show at 10:30 am, 1 pm, and 3 pm, where audience members can help select various animal features to create the ideal trick-or-treating companion for a lonely scientist, and Gene Granata of Masterpiece Pumpkins showing off his magical pumpkin-carving skills from 10 am to 4 pm. Sponsor giveaways, games, and more will add to the fun to weekend days throughout the month.

The landmark Los Angeles Zoo and Botanical Gardens, drawing nearly 1.8 million visitors each year, is home to a diverse collection of 1,100 animals representing 250 different species, many of which are rare or endangered, as well as a botanical collection comprising over 800 different plant species with approximately 7,000 individual plants. Accredited by the Association of Zoos and Aquariums (AZA), whose members meet rigorous professional standards for animal welfare, the Zoo has achieved renown as an international leader in the preservation of endangered species and a conservation center for the care and study of wildlife. Its responsibility toward wildlife conservation not only encompasses safeguarding the animals in its care but also actively participating in the preservation of some of the world’s most critically endangered species and their habitats. Its many conservation successes include having led the charge in saving California condors from extinction and restoring populations of these critically endangered animals to their native habitats. The Zoo’s lush grounds on 113 acres feature Rainforest of the Americas, an extraordinary collection of endangered and exotic mammals, reptiles, fish and amphibians living in spaces that exemplify their natural habitat in the rainforest biosphere; Chimpanzees of Mahale Mountains, home to one of the largest troops of chimpanzees in the United States; Red Ape Rain Forest, where visitors can walk among orangutans; the LAIR (Living Amphibians, Invertebrates, and Reptiles); Elephants of Asia; Campo Gorilla Reserve; and one of the largest flocks of flamingos in any zoo in the world. Among other highlights are an extraordinary, hands-on Hippo Encounter and face-to-face Giraffe Feedings; the Winnick Family Children’s Zoo and Muriel’s Ranch animal contact area; the Tom Mankiewicz Conservation Carousel; a variety of daily opportunities to learn more about animals, including close-up visits, special feedings and intriguing talks; and much more. The private, non-profit Greater Los Angeles Zoo Association (GLAZA), which has supported the Zoo in partnership with the City of Los Angeles for more than five decades and provides funding for and operates seven essential Zoo departments, has 60,000 member households representing more than 240,000 adults and children. As evidence of the Zoo’s popularity, GLAZA attracts one of the largest membership bases of any cultural organization in Los Angeles.

The Los Angeles Zoo is located at 5333 Zoo Drive in Los Angeles’ Griffith Park at the junction of the Ventura (134) and Golden State (5) freeways. Free parking is available. For general information about the Zoo, call (323) 644-4200.