Experience a unique festival filled with frights—and see film’s creepiest characters and fears come to life from the big screen to the backlot—at the Warner Bros. Studio Tour Hollywood’s immersive and insidiously entertaining experience, Horror Made Here: A Festival of Frights.

Horror Made Here is back with a vengeance and the famous Warner Bros. backlot has once again been transformed into a festival of frights. So grab your friends and get ready to face your biggest fears because Horror Made Here: A Festival of Frights starts tomorrow October 5, 2018 for 13 nights and will definitely sell-out so don’t get left behind in the dark!

What’s good Gab was invited to an exclusive Horror Made Here Losers’ Club Press Preview last night and we experienced an epic and eerie celebration of all things horror, haunted, and Halloween. Here are the hair-raising highlights, and let’s just say we are lucky to be alive and have survived such a sinister and frightfully-fun festival! 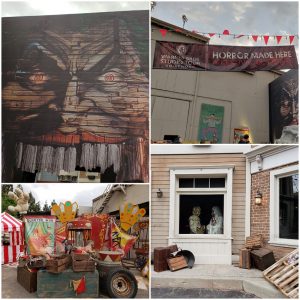 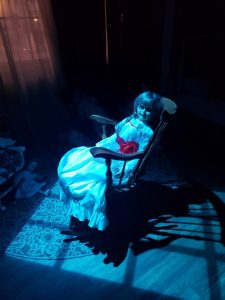 Enter if you dare and experience the dark world of paranormal investigators Ed and Lorraine Warren. This was one of our favorite mazes, The Conjuring Universe is a macabre masterpiece where you get to walk through The Warrens’ haunting grounds filled with a host of satanic spirits—and best-of-all the movies’ creepiest characters come to life here. Keep your eyes peeled as soon as you enter and beware because you just might be greeted by a glimpse of The Nun. See the Warrens’ Occult Museum of haunted objects and creepy curiosities—as seen in The Conjuring as the room where the demon-possessed doll Annabelle currently resides…or so it seems because she is supposed to be sitting behind the enclosed case but has gone missing! You will fall victim and freeze once you do find Annabelle in the nursery where she has her eyes dead-locked on you. And watch out, you just not make it out alive because you WILL literally come face-to-face with the demon lurking in the shadows behind an ominous painting of The Nun. 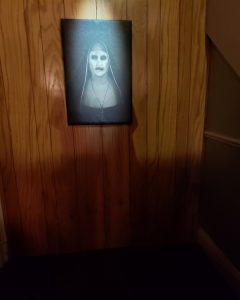 It Knows What Scares You 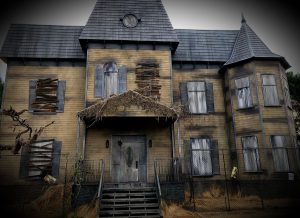 You will FLOAT with fear inside the IT Knows What Scares You maze, where you will be immersed into the scariest scenes from the film IT—and come face to face with Georgie’s ghost and Pennywise the clown who is creeping around the darkest corners. IT Knows What Scares You maze was also one of our favorites that was visually stunning from start to finish. You enter through the notorious and nefarious Neibolt House where you are thrust into the freakishly-frightening world of Pennywise. You will be terrified and thrilled with lots of scares, iconic scenes, and surprises at every turn including the notorious red balloon and Georgie lurking in the infamous basement with his yellow rain jacket. And you will feel like you are a part of the Losers’ Club because you will experience their nightmares like being surrounded in a bathroom filled with blood like Beverly, being hunted by Eddie’s nightmarish and sick-infested zombie, being chased by Ben’s headless boy in the library, being tormented by Derry’s bullies, and even having your very own personal encounter with Pennywise in his lair! 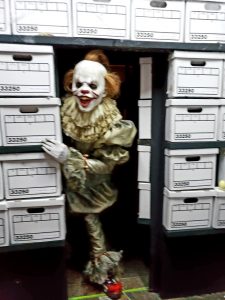 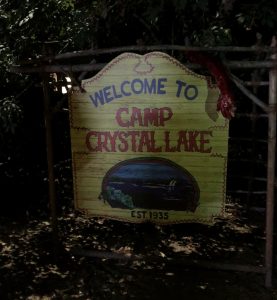 Take the ride of your life in the Freddy vs. Jason Camp Crystal Lake encounter where you embark on an eerie behind-the-scenes backlot tour aboard a Warner Bros.’ tour cart that drops you off into the deep, dark woods. Get ready to meet your camp counselor and the worst nightmare of your life in Nightmare on Camp Crystal Lake because behind the shadows of the creepy, creaky woods Freddy Krueger and Jason Voorhees await! You get a chance to camp at Camp Crystal Lake and walk through the woods at night, see the infamous lake yourself, explore the cabin and camping grounds, all while playing a survival game of cat and mouse where you never know if your fate and life ends at the hands of Freddy or Jason. And stay awake and alert because you never know if you just might come head-to-head with mother- Mrs. Voorhees herself! 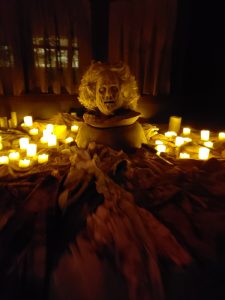 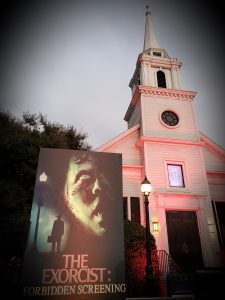 Experience a special “forbidden screening” of the 1973 classic The Exorcist inside the backlot church for a supernatural thrill you will never forget or UNSEE! Enter the safe haven of this backlot church and make way into one of the pews for a front seat to an unholy viewing and truly demonic encounter. The Exorcist: Forbidden Screening gives you a unique 4D experience where you bear witness to supernatural thrills and relive the most terrifying scenes from The Exorcist. You will be scared and shaken, objects will move, doors will swing open, and a blasphemous presence will rise from the altar podium! 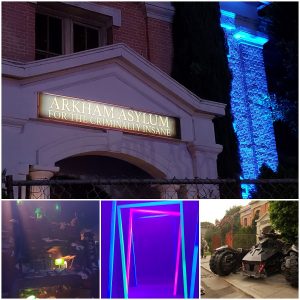 After experiencing all the other mazes you will go mad, so be sure to check yourself into Batman: Arkham Asylum. The Joker has taken over the Arkham Asylum and has some tricks up his sleeve to try to keep you in this twisted institution. Harley Quinn is also there to help the Joker keep you locked up, as well as other DC Super-Villains who want you to go out of your mind into a downward spiral in their neon-twisted world filled with mayhem and madness! 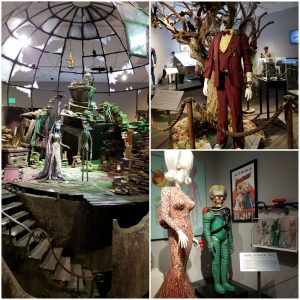 Geek out into film fandom inside Stage 48 where you’ll get a close-up and special access to the world of Tim Burton and see authentic props and costumes from his iconic movies Sweeney Todd, The Corpse Bride, Mars Attacks! and for the first time ever on display at Warner Bros. original props from the Halloween classic, Beetlejuice.

Ground zero of Horror Made Here features a main stage with a live DJ that will get you in the mood to move and grove through the night as well as carnival games, food and beverage selections throughout the lot. Be sure to stop by at the following hot spots: 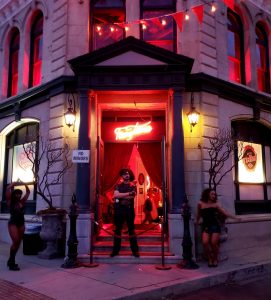 Satisfy your thirst for booze or blood at this goth-punk bar, Fangtasia featured in the HBO series True Blood. Take in the red and black décor and pose with props while sipping on some cool cocktails like Bat Blood and The Skeleton Key. And if you need to replenish like a “Tru-Blood” vampire then order up the blood bag cocktail called True Blood, that’s sure to revive you! 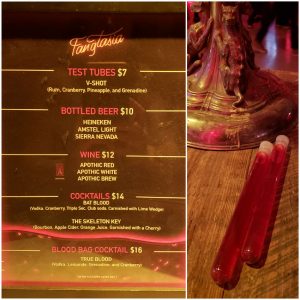 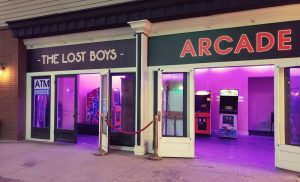 Take a break from all the scares and blow off some steam by getting your “game on” at the Lost Boys-themed arcade. You’ll have a totally rad time playing retro 80’s games like Ms. Pac-Man, Tetris, Mario Bros, Space Invaders and Terminator 2 Pinball. 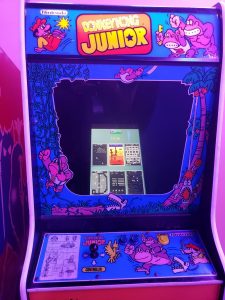 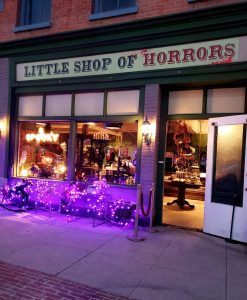 Get your shop on at this cool gift shop featuring Halloween and Horror Made Here merchandise that’s stylishly-scary for the season. 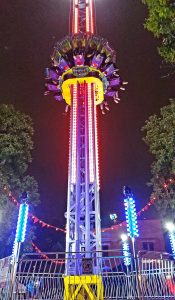 Get your adrenaline fix for adventure and take a 90-foot plunge into the air for the scream of your life. 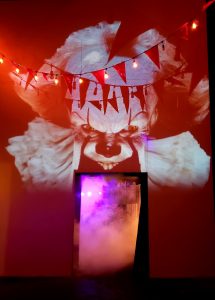 Horror Made Here begins tomorrow October 5, 2018 (to an already sold out night) and continues for 13 nights through October 28. Tickets are on sale now, starting from $59 per person at horrormadehere.com.

Insider Tip: For an unforgettable and premium experience be sure to upgrade to join the “The Losers’ Club” for the night. You’ll get to enjoy front-of-line access to each maze without worry of waiting in long lines so you’ll be first to the frights. And you also get to enjoy two complimentary beverages, one free IT photo-op, and free priority parking.